The 1960s was a decade of transformational change and the same would apply to Nairobi City Players as the company expanded its production scope to a level not envisaged at the time of its founding in 1956.

NCP kicked off the new decade with a very ambitious production – The Diary of Anne Frank – which captivated Nairobi audiences and catapulted NCP to a new level of sophistication. Tickets were in such demand that the box office had to remain open late. The play ran at the National Theatre from 4-12 March 1960.

The opening night was a rather lavish affair with the East Africa Consul-General for The Netherlands as a special guest accompanied by other diplomats and Nairobi socialites.  The set design – an attic over a warehouse in Amsterdam – was challenging but the set designer, Michael Reeves, fulfilled his gargantuan task with much aplomb and received due praise from the critics for his ‘ingeniously constructed set.’

A young actress – Janet Lees-Price – also faced a big challenge in portraying the attic-bound Anne Frank. One critic remarked that she developed her role ‘quite exquisitely from a bouncing, frequently intolerable child, to a deep perception of womanhood.’  Her father, Frank price, also starred in the play.  Janet Lees-Price would go on to become an accomplished British actress appearing in well-known TV shows and dramas such as Upstairs Downstairs, Emergency Ward 10 and Dixon of Dock Green.

Sbish Trebinski and David Gregg were also praised for their performances.

Robert Beaumont directed the production and would go on to direct many more NCP productions, particularly musicals. 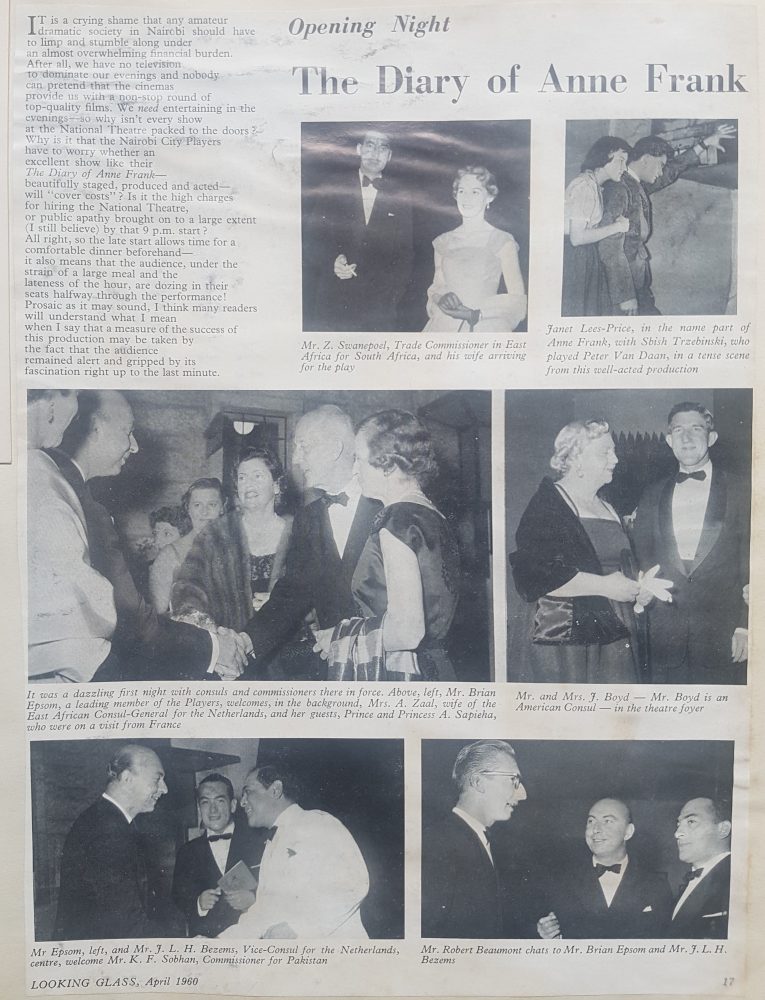